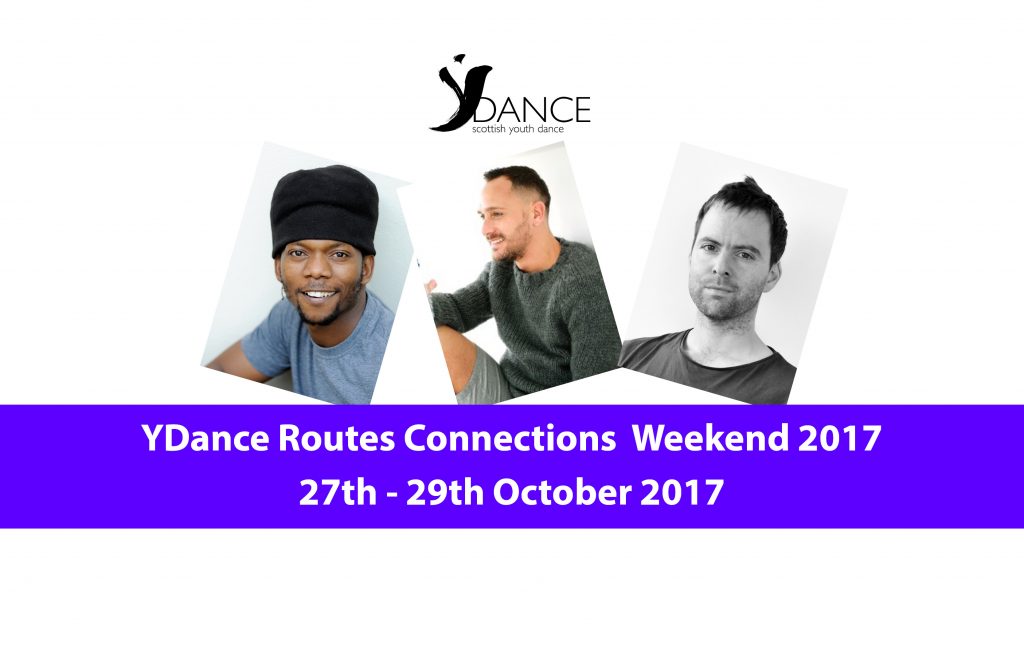 YDance have today announced the three choreographers who will work with the dancers at the YDance Routes Connections Weekend 2017.

Bawren Tavaziva, Ian West and Renaud Wiser have all been confirmed for the dance development weekend which sees dancers aged 12 to 21 travel from all over the country to take part in different dance and choreographic workshops, and create and perform a new dance piece. The Connections weekend is a fun dance opportunity for youth dance groups and individuals, of all dance styles, from across Scotland. Bawren Tavaziva grew up in a rural village near Masvingo in Zimbabwe. Football, Michael Jackson, New Edition and Kung Fu movies viewed at the local community hall provided inspiration to Bawren and his friends.

At age 12, Bawren attended an outreach ballet project with the National Ballet of Zimbabwe at his local community centre. From day one, his determination and talent led him to a life-long passion for dance. He danced with Tumbuka for five years and toured Africa. He came to England to join Phoenix and Union Dance, and in 2014 he presented his own choreography and music as a finalist at The Place Prize with a deeply moving quintet entitled Umdhlalo Kasisi, in memory of his sister.

After this, Bawren formed his own company and became Artistic Director of Tavaziva Dance and in the same year won a fellowship with Dance of the African Diaspora’s Trailblazer programme. He went on to produce further works for his own company, Soul Inspired (2005); Bophelo (2006); Chatsva (2007); Heart of Darkness (2009); Wild Dog (2010); Double Take (2011); Sensual Africa (2012); Greed (2013); Tavaziva Ten (2014); and Africarmen (2015). In 2017 Bawren was commissioned by Rambert to research new dance work Mus Child, working with Polka Theatre’s Artistic Director Pete Glanville. In 2018 Bawren will choreograph Ending the Silence by MBE’s Euton Daley.

Bawren’s is known for his distinctive, unique style – a choreographic synthesis of ballet, contemporary and African dance. Since graduating from the Doreen Bird College of Performing Arts in London where he was awarded a prestigious 3-year scholarship, Ian West has worked internationally for over 20 years in film, TV and theatre, firstly as a dancer and now solely as a creative choreographer and movement director. Born in Lausanne, Switzerland, in 1979 and trained with the Ballet Junior in Geneva, Renaud Wiser is a former dancer with the Ballet du Grand Theatre de Genève, the Ballet National de Marseille, The Gothenburg Ballet, Rambert and Bonachela Dance Company. He is the Artistic Director of Renaud Wiser Dance Company and a founder-member of New Movement Collective (nominee at the 2013 and 2014 National Critic Circle Awards and associate company at Rambert).

Twice commissioned by Dance City, his work has been presented in key venues in the UK including Dance City, DanceEast, Greenwich Dance, Pavilion Dance South West and Rich Mix, as well as in festivals in Spain, Poland, Latvia, Italy and Switzerland.

A guest tutor at the Architectural Association – School of Architecture, Renaud has a particular interest in collaborative work and in merging practices with a range of art forms including architecture, film, music and design.

In 2015 Renaud created and toured his new work Who Killed Bambi?. Last year, he co-created and performed in Collapse, a period drama at the London Southbank Centre with New Movement Collective. He engages regularly with a large number of professional dancers, dance students and enthusiasts, leading Master Classes, workshops and creating short works with students from Royal Ballet School, Central School of Ballet and London Contemporary Dance School among others. Renaud recently worked as movement director for a production of Othello at the Bristol Tobacco Factory. He is a recipient of the Once Dance UK mentoring programme and took part in DanceEast Rural retreat for future leaders in 2015.