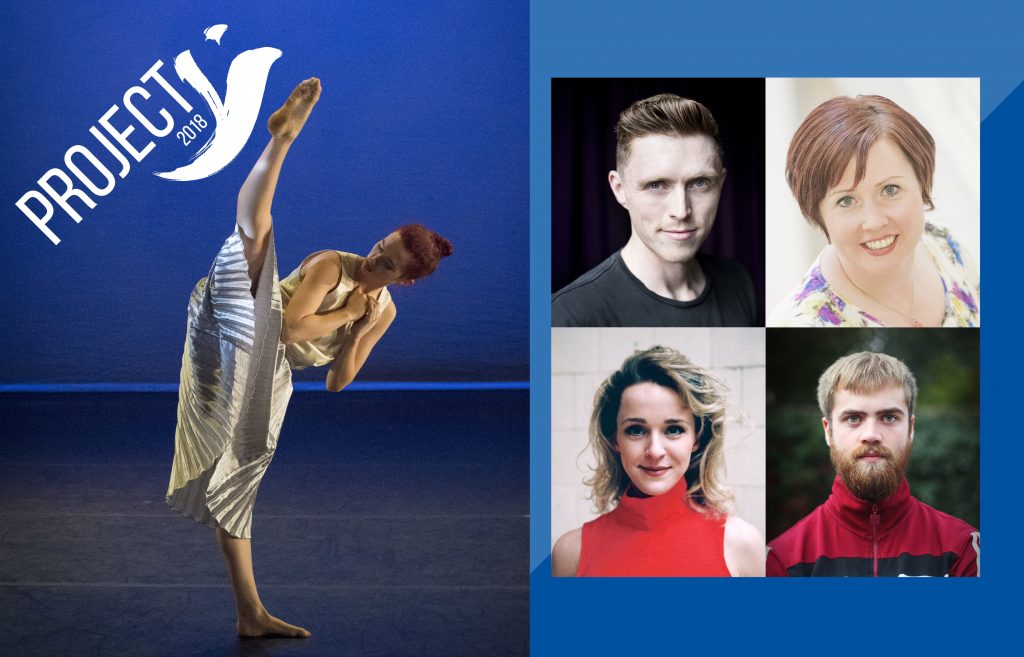 Four acclaimed choreographers have been announced for the Project Y Performance Course 2018.

Over four weeks, Richard Chappell, James Cousins, Anna Kenrick, and Sophie Laplane will work with some of the UK’s best young contemporary dancers to create a collection of four new and exhilarating contemporary dance works to be performed across Scotland this July in the annual Project Y tour.

The Project Y tour showcases the breath-taking talent of some of the UK’s best young contemporary dancers aged 16 – 21 upon completion of the four-week intensive dance training programme, the Project Y Performance Course.

Richard Chappell is an internationally renowned choreographer and performer. After training on the Royal Ballet School’s Associate programme, Richard continued to study at Tring Park School, before undertaking a BA Hons Degree at Rambert School.

Since 2013, Richard has lead his own company under the name Richard Chappell Dance and his inaugural double bill IRIS and The Vast Rocks toured 2013 – 2016. In 2017, he created his first full length work At the end we begin on Studio, Wayne McGregor’s FreeSpace programme, which tours extensively throughout 2018. He also created short dance film Moments in 360 (2015) for viewing in virtual reality on Oculus Rift. Richard has created works for many companies, including Stuttgart Ballet, English National Ballet, Frontier Danceland (Singapore) and BalletWorks.

James Cousins has been recognised by Time Out magazine as one of the future faces of dance, called a ‘rising star’ by The Independent and described by Matthew Bourne as ‘one of the UK’s most promising choreographic talents’.

In 2012, he was the winner of the inaugural New Adventures Choreographer Award, selected by Matthew Bourne for his ‘refreshing desire to entertain’. The award culminated in a sold out performance at Sadler’s Wells, London, where his work was critically acclaimed as ‘outstanding’, ‘visually breath-taking’ and ‘spellbindingly beautiful’.

In 2014, he formed James Cousins Company with producer Francesca Moseley and as a freelance choreographer, James has been commissioned to create work for companies around the world including National Ballet of Chile, Oper Graz, Royal Ballet of Flanders and Scottish Ballet, as well as commercial projects with Anne-Marie, Nadav Kandar and Impulse.

Anna Kenrick trained at the Northern School of Contemporary Dance before working with the Education Team at The Place, London, Magpie Dance Company, Anjali Dance Company, and teaching for many different schools and organisations across the UK as a choreographer, teacher and facilitator.

In 2002, Anna joined Ludus Dance Company where she worked as both a dancer and teacher. She performed in UK and international tours of Perfecting Eugene, Trapped and Zygote, as well as working with choreographers Rosie Kay, Filip Van Huffel and Hannah Gillgren.

In 2007, she joined YDance (Scottish Youth Dance) as Project Director for the Free to Dance project. In 2011, she was appointed Artistic Director of YDance and has gone on to create and choreograph new works for the National Youth Dance Company of Scotland, including Stuck in My Throat (2015), Maelstrom (2016) and Di-ver-gent (2018). Glasgow Life commissioned her to create pieces for the cultural programmes for the 2012 Olympics, the Commonwealth Games in 2014 and the World Gymnastics Championships in 2015, as well as directing and programming the first ever Commonwealth Youth Dance festival in 2014.

Sophie Laplane trained as a dancer at the Conservatoire National Supérieur de Paris and became First Artist with Scottish Ballet, dancing in Classical and Contemporary roles. She has danced for many internationally renowned choreographers, including Angelin Prejlocaj, Matthew Bourne and Christopher Hampson.

Heralded as ‘a major talent in the making’, Sophie honed her choreographic skills under the leadership of the Scottish Ballet CEO/Director Christopher Hampson. Her first short work, Oxymore was showcased at The Edinburgh Festival 2013. It’s punchy, quirky style was hailed as an immediate success by the critics and was featured at the 2015 TedX Glasgow event.